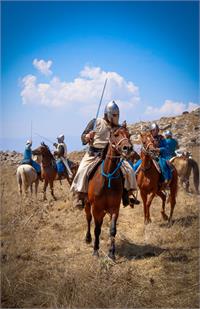 The Horns of Hattin march

The Battle of Hattin

==
The reenactment of one of the most significant battles of the Crusader period, the Battle of Hattin, will take place on its 831th anniversary (July 5 - 7, 2018), and include a two-day journey culminating in the reenactment of the battle itself.
==

Every year, the Regnum Hierosolymitanum group for history reenactment along with other groups from Israel and other countries (Germany, Turkey, Russia and Ukraine. Last year, participants also came from Poland, Cyprus and the United States), reconstruct the events surrounding the Battle of Hattin in the actual landscape and in conditions similar to those prevailing at the time.

This project is based on significant academic and archaeological research carried out on the battle itself and the location.

The Horns of Hattin march is a living historical event. All attendees actively participate in the reenactment and are assigned to one of two armies: King of Jerusalem Guy de Lusignan or Salah ad-Din. Characters include knights, professional mercenaries, members of the military order, horseback riders, Mamelukes, pilgrims, countrymen, city dwellers, Bedouins, musicians, and others.

We invite you to join and experience this exciting and special event.

The Regnum Hierosolymitanum group carries out historical reenactments of significant events that occurred in the Crusader Kingdom of Jerusalem, focusing on the second and third quarters of the 12th century, before the destruction of the Kingdom (which followed its defeat at the Battle of Hattin in 1187).

During the journey (July 5 - 7, 2018), there will be various stops along the way, near the Zippori spring, inside Hoshaya - in the Kedem village and in the Lavi forest (approximately one km from the Golani junction).

The project organizer Genadiy Nizhnik, is an expert in medieval and biblical archeology and heads the "Kingdom of Jerusalem" club.

Visit the web site at http://www.horns-hattin.com/
Key times and points for photographers and reporters