מייל
first round table workshop on improving relations between Poland and Israel on Monday, July 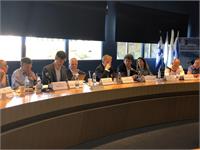 Senior academics and government officials from Israel and Poland participated 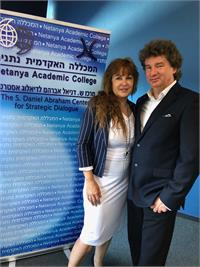 Israel and Poland must overcome the crises and look ahead, not at the past - Says Dr. Andre Gasiorowski

Dr. Gasiorowski took part in the first round table workshop on improving relations between Poland [[and Israel on Monday, July 1

"Israel and Poland are interested and have to overcome the misunderstandings to reach agreements and upgrade diplomatic relations between them," says Dr. Andre Gasiorowski, Chairman of Yad La'Aza L'Israel Forum, following a round table workshop on improving relations between Poland and Israel at the Daniel Abraham Center for Strategic Dialogue at Netanya Academic College.

The workshop was attended by leading experts and representatives of civil society, some of whom have close ties with the governments. The workshop discussed the relevant challenges and proposed solutions, while brainstorming for an international conference on the relations between Israel and Poland, to be held immediately following the upcoming elections in Israel and Poland

Dr. Andre Gasiorowski stresses that the issue of Jewish-Polish relations is sensitive and loaded not only with us, but also among the Poles, and has in the past led to disagreements and misunderstandings and agreements. It should be noted that Poland was also a victim of the Nazis and the occupation of Poland by the Nazis was particularly cruel to the Poles as well, including murders And forced labor, and that alongside the three million Polish Jews exterminated by the Nazis, three million Christian Poles were also killed and murdered.

Dr. Andre Gasiorowski, who initiated and operates the Yad L'Ezra Israel organization in Israel, which helps tens of thousands of Holocaust survivors in Israel, emphasizes that it is worth remembering that 7,000 Poles saved Jews - the largest group of Righteous Among the Nations to whom the Polish government is very proud.

Dr. Andre Gasiorowski emphasizes that it will be a mistake and a cry for generations to be dragged back into the past instead of looking forward to the future and horizon of diplomatic relations and important ties in all fields between two friendly countries - Israel and Poland.