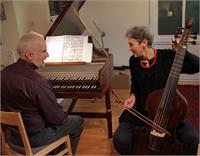 ==
The fourth chapter of Ensemble PHOENIX's Bach project will take place in early May, in a series of four concerts featuring his three sonatas for viola da gamba and harpsichord which are, without a doubt, the culmination of the musical literature for viola da gamba.
==

The sonatas, originally written for viola da gamba, are mostly heard on the cello. This time, they will be performed by Myrna Herzog on an eighteenth century viol, together with harpsichordist David Shemer – both most distinguished names in the field of historical performance in the country.

In the frame of the J. S. Bach project, Ensemble PHOENIX presents, once a year, special and significant works by Bach. The three previous chapters were devoted to the Art of Fugue (2010), the Musical Offering (2011) and the Goldberg Variations in a chamber ensemble version by Bernard Labadie (2012) , and were received enthusiastically by audiences and critics alike.